Kelp isn’t a fast walker, so it takes a while, but he eventually catches up to Caiti. She is hiding behind a mound of rocks and when Caiti sees Kelp approaching, she tucks into her shell.
“Why did you run away?” asks Kelp. From inside her shell, Caiti responds, “You were laughing at me. Why didn’t you tell me I was all green?”
“I thought you did that on purpose,” says Kelp.
“Really,” says Caiti, “you think I’d do this on purpose? Really?”
Kelp just stares at Caiti. He’s afraid of saying the wrong thing but after a few uncomfortable moments, he says, “Have you tried to get it off?”
Caiti shakes her head, No.
“We should try,” says Kelp. “Maybe we can rub it off with some dirt.”
Caiti pops her head out of her shell. A small smile comes across her face. Kelp turns around and uses his back legs to kick dirt all over Caiti. She joins in and slides around in the dirt. Then with Kelp’s help, she flips over on her back and spins like a spinning
top. All that’s seen is a cloud of dust as Caiti and Kelp get lost in the dirt. As the cloud of dust settles, Caiti opens her eyes and looks at Kelp. They are both filthy and for now, she looks brown. “Did it work?” asks Caiti. “Am I still green?”
“Let me blow the dirt off first,” says Kelp. Caiti closes her eyes as Kelp takes a deep breath and blows the dirt off. Kelp makes the strangest sound as he blows. It sounds like the air is being let out of a balloon. It’s working though. The green is blowing off with the dirt and for the first time, we can see Caiti’s shining gray face. A hopeful Caiti asks again, “Did it work?” Kelp says nothing, but his smile says it all. “It worked?” yells an excited Caiti.

“Yes, it is working,” says Kelp. And with that, both Caiti and Kelp blow the dirt off different parts of her. They get lost in another cloud of dust and together the sound of air being let out of two balloons fills the air. Out of breath, they both stop blowing and collapse right where they are standing. All the blowing wore them both out but, Caiti is smiling again.

Caiti and Kelp are best friends and tortioses that live in the Mojave Desert. This excerpt is from the book entitled, Caiti and Kelp: A Green Day. Which is book one of volume one (Caiti Green). 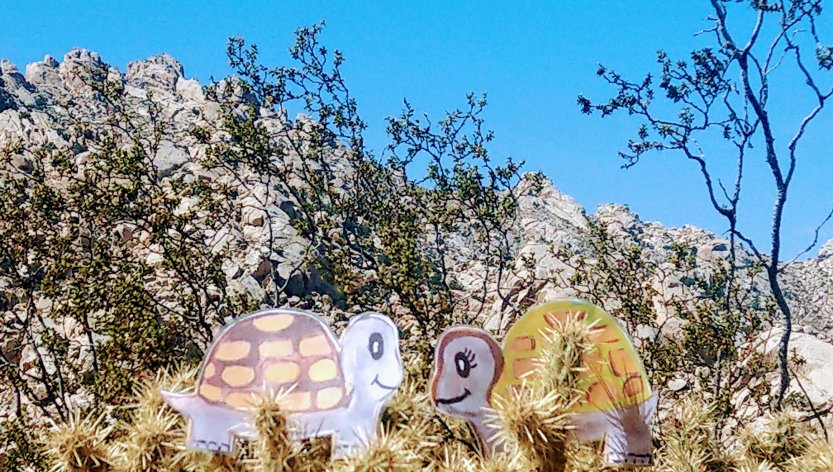